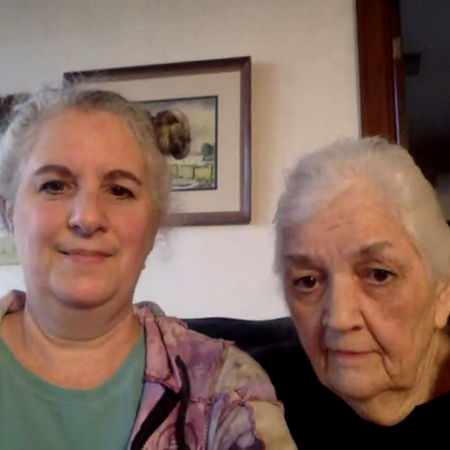 Amanda Ramsey (57) and her mother Bette Ramsey (81) remember Buck Ramsey, Amanda's father and Bette's husband, who was a crooner and life-long cowboy. The mother daughter duo recall that even after Buck became paralyzed after a horse accident, he kept his cowboy spirit alive through cowboy poetry and his connection to the land.

01:59
AR says that on January 3rd it will mark 23 years since her father passed and talks about her memories of being in the house she grew up in, and talks about her father being a cowboy. AR then asks BR what it was like before her father's accident in the early days of their marriage when he was still cowboying.
03:35
BR describes her husband Buck in high school who was a “crooner” who could make the girls “swoon” because he sang like Frank Sinatra.
06:50
BR talks about the accident Buck had on his horse Cinnamon, breaking his neck and crushing his spine, paralyzing him, and stopped him from being able to cowboy.
09:26
BR talks about receiving word that she was needed at the hospital because of her husband's accident, they had only been married a few months, and talks about arriving at the hospital in Amarillo.
12:40
BR recalls the doctors telling her they needed to do surgery to alleviate her husband's pain and that if he survived, he would have a chance to live, but would be paralyzed.
18:53
AR says that while her father was still in the hospital, she was born, and asks BR what she thinks her dad was able to hold onto from his cowboy way of life because she felt her dad kept the cowboy spirit alive in his heart.
20:17
BR says that Buck was lucky, she never knew anyone who had as many friends, and that his friends stuck with him throughout his time in the hospital, afterwards, and when he couldn't cowboy anymore.
21:47
BR recalls the first thing Buck said to AR after she was born, prematurely -- “well you’re not very dang big !”.
29:50
BR and AR talk about Buck’s singing and music.
31:33
AR says that her father encouraged her to write and write poetry from age 3 and up, and talks about her father going to the Cowboy Poetry Gathering and his discovering that whole new world.
37:18
AR recalls hearing from her dad that he was like a kid in a candy store after he attended the poetry gathering and that that's what inspired her to start going herself.
39:00
AR reads the first stanza of one of her fathers poem.