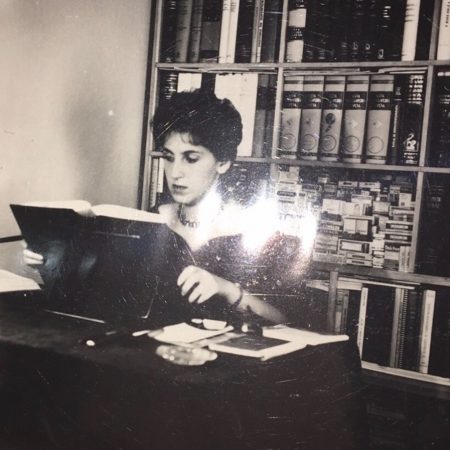 An Interview With My Argentine Grandmother

Estela Fernandez, born on December 6th of 1940, is the daughter of European refugees who came to Buenos Aires, Argentina during World War 1. She talks about her fondest memories, such as hanging out with her families on the weekends, studying literature and psychology at the University of Buenos Aires (one of the top 100 universities in the world), and how her transition to other countries were like. She also compares political and social problems of the United States to what is happening to her country right now. She wants to leave a message to young people, saying that if you don’t put enough strength or courage, you won’t go forward in life; it is best to study and think about your choices wisely.

What were your first memories?
- I remember going to my grandmother’s house to reunite with my family on the weekends. We were always united and I love my grandparents. They came as refugees from Italy, France, and Spain. They came here with nothing, but like any immigrant, they worked hard for a better life.

What memories do you have of your secondary and university school?
- Throughout all my school career, I went to public. Primary was public. Secondary was public. Even university was public and free. But now, Argentine parents feel the need to put their children into private schools because there are too many political problems and strikes in public schools. Same as university. The kids just want to study.

What do you think of Argentina trying to strip away the public school system?
- I don’t think that will ever happen. We are very passionate about education, and after all, public schools exist for the people who can’t pay. Education should be for everyone. The government itself needs to focus on paying instead of putting themselves into other international chaos.

Since you got married at 21 and had to move to Peru with my grandfather, how was the transition like?
- Although we both come from Latin Culture, it was hard for me to get accosted. It’s a very beautiful country, but very discriminative towards economic class. In Peru, only two economic classes exist: rich and poor. While in Argentina, there is a middle class. I was really sad to leave Argentina, especially at its golden era. It was the best era for Argentines. I will eventually move back just to revisit my old times.

How was your transition to the US like? What differences did you see?
- Even worse. I came here due to family problems, and I was finally in Argentina living there. Then I had to come here. The people are the most different. In Argentina, they are more about the simple things in life. They are also very passionate and want to hear your opinion. While in the US, they are more materialistic and want to have more. They are also not very opinionated, and want to keep quiet. Only the younger generation is very passionate.

How are the political and social problems different?
- Well, in Argentina, it’s more the economic problems rising. They also have many protests for Women’s Rights this year. As for the US, it’s immigration as gun control. In Argentina, we are still accepting immigrants from other Latin American countries because they have it much worse than us. Although we do complain sometimes because they get higher job positions, we don’t want to kick them out. Americans should realize that this land belonged to the natives, therefore they are immigrants too. And shouldn’t think that way. I other countries, they have it difficult and dangerous and the US is a land full of new beginnings to them.

What message do you want to leave for the people hearing this?
- That to move forward in life, you must have strength and courage. You also have to study to make wise decisions.