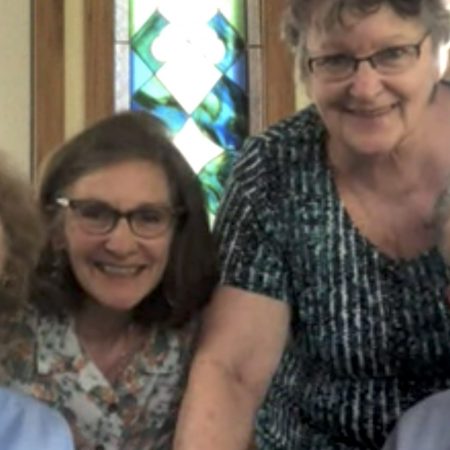 Evelyn Brugger-Hocker (63) and her sister, Susan Hocker (69), interview their parents, William "Bill" Hocker (96) and Phyllis Hocker (93), about William's memories of growing up on a farm and serving in World War II, and Phyllis' memories of settling in Dayton with her family and later having children.

3:20
TRACK 1 EBH and SH talk about WH's experience with COVID-19 and being in the hospital.
0:19
TRACK 2 WH shares what he remembers from his time in the hospital.
2:53
WH talks about growing up on a farm.
8:30
WH shares what he remembers from his time serving in World War II.
12:45
EBH recalls her time as a nurse.
14:54
PH shares childhood memories and talks about what her father did for work and what he was paid.
19:30
EBH remembers when PH would take her and her siblings on camping trips as children.
21:40
EBH names all of her siblings.
26:30
WH shares memories of traveling in Austria with the family.
28:20
SH and EBH share what they remember about family dinners growing up.