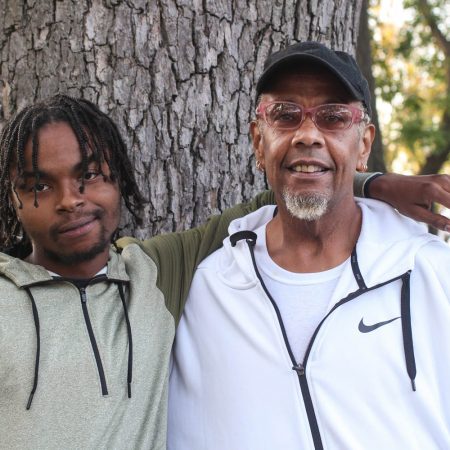 Guy Bryant grew up surrounded by women who dedicated themselves to caring for children in their Brooklyn community. He then spent years working with foster teens as they made the transition to living on their own.

But after three decades as an administrator in the child welfare system, he felt that he wasn’t doing enough. So one day, he brought his work home with him, and twelve years later, he’s fostered over 50 young people in his New York City apartment.

Guy came to StoryCorps with one of these kids, Romario Vassell, to talk about the early days.

00:00 What were you feeling when you brought your first kid home nervous? I was nervous because I lived alone at that point and he was a kid that nobody wanted to take because of his behavior. Is he got in a fight and he appeared at my house and was late. So I called and let them know he was with me and I agreed to take him. How did your family react? When he became a foster parent? They thought I was out of my mind, like you live alone so long and my ex-wife was like, I don't know about this. You just so set in your ways. I said I can do this and she said, I know you can if you put your mind to it, the first time I met you pop. I think I was at the office. I remember that you came in and you would just shoveled. You were still in the shelter and I presented to you coming into foster care and it first, you were hesitant because I didn't know how fast your wife. I've heard crazy stories, but then you were like, all right.

00:59 It's definitely one of the best decisions I made in foster care. Definitely, you know, every time I turned around there was a kid who needed a place to stay and I felt like it's so simple. If you have the space in your home and hide you just do it. You don't really think about it. One point. I had nine kids in my house and had to move to a bigger apartment. The old kids still have the keys then, you know, usually, everybody's in the house on Sundays kids, new kids. I usually cook a lot. Last Sunday's dinner was BBQ, chicken fried, chicken macaroni, and cheese and macaroni was good. Collard greens cornbread. I try to cook enough to last a day or two, but that never works out that way.

01:49 What has changed since you started? Living with me. If I feel down and like I'm cornered? I have someone I can reach out to and talk to and that's why I really love whatever you've learned from me. I want you to teach it to someone else because that's what's important to me.

02:13 As Pop Punk. That says it all to me that I can be somebody's pop, without being biologically connected to them. Do you know your mind? Yeah. I know I am and I love you to death.