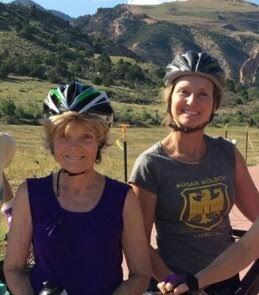 Jenni Hightower (51) speaks with her mother Mary Jasper (79) to learn about their family history, spanning back seven generations in Colorado. Mary shares family history dating back to the early 1900s and recounts former times she's learned about as the keeper of the family history.

01:20
JH says that MJ is the oldest living relative in their family and that MJ has been collecting their family history and that she can trace their family back 7 generations in Colorado. MJ explains the family connection to CO.
06:18
MJ talks about her grandfather Frank's homestead project as part of the homestead act around 1908.
11:11
MJ talks about the sugar beet factory and the Arkansas river that would have provided water for this endeavor but it had dried up (1910-11) so the family got sheep and grew sheep instead and her grandfather became the county commissioner.
15:47
MJ talks about when her father was born, no running water, no electricity and that her great grandma Deborah was a nurse and helped nurse him.
21:55
MJ talks about her mothers side (the Tinker) and that her ancestors came over on the Mayflower.
23:20
MJ talks about her mothers brother who was killed in an accident and the effect this had on her grandmother, that she was comatose.
25:12
MJ talks about how her parents met and how when her grandmother met her soon to be son-in-law, it snapped her grandma out of her comatose state.
30:15
MJ says that in 1925 her father left the family ranch and headed for Colorado Springs.
34:00
MJ says that around 1938/39 her father headed back to the ranch with his close friend but then the draft for the second world war occurred so her father never got settled back on the ranch.
39:25
MJ talks about what her grandma thought about her life in Denver in the 1960s and how different her life was versus her grandmothers.