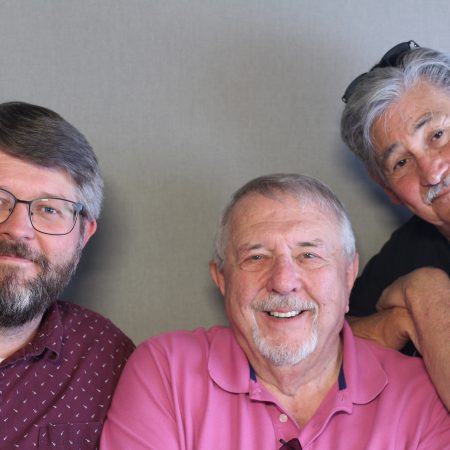 Friends and former colleagues, Jerry Lee [no age given], Don Priest (74), and Bryan Harley (35) reminisce about how they each met and began working at CMAC. They reflect on some of the challenges they faced in opening the organization and why it's been so important to them to provide affordable and accessible community media resources.

01:30
JL recalls when he first became executive director of Community Media Access Collaborative (CMAC). BH, the current Executive Director, talks about where CMAC is now.
04:45
JL recalls how he was involved with CMAC before becoming the ED, while he was still working at PBS, and why he wanted to be involved in public access television.
09:00
DP recalls first coming on board with the organization because he was told to do so and why he decided to become more involved.
13:00
BH recalls how he first met DP when taking his class at Fresno State, and what he did after college before coming to work for CMAC.
15:30
DP, JL and BH remember the process of looking for a site for the organization and eventually opening CMAC at its current location in downtown Fresno.
19:30
JL and BH reflect on how the board made sure CMAC was affordable. JL recalls another effort to make resources accessible by teaching high school students how to work video and audio equipment.
23:50
BH reflects on some of his proudest and fondest memories of CMAC: a summer camp for kids and a recent program that made resources even more accessible for those who could otherwise not afford it.
27:50
JL reflects on being proud of the growth of CMAC and its staff.
31:20
DP reflects on being proud to have so many of its students becoming CMAC staff and taking pride and joy in the craft of television. JL, DP and BH reflect on the importance of the experience of acquiring knowledge of how to work with multi-media.
35:15
BH talks about what is in CMAC's future.