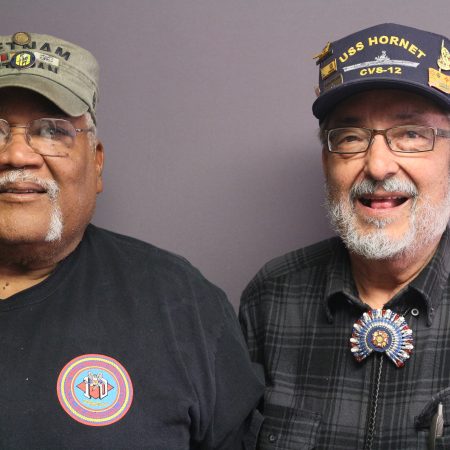 Jesse Addison (73) speaks with James Jaramillo (76) about their time in the United States Navy during the Vietnam War, being drafted, volunteering, and coming back to life after the war.

0:50
JJ recalls enlisting in the Navy and surprising his family. JA remembers his surprise being drafted after graduating, and speaks about his family's Navy history. JA recalls being promised a role in Hawaii and ending up in Vietnam six months later.
4:50
JA remembers being assigned to a Naval carrier and becoming a captain's yeoman. JA remembers boot camp to become a Naval "Seabee," being in a firefight in Da Nang, and carrying the guilt of seeing friends killed in action.
13:00
JA recalls checking in with a PTSD group for veterans and finding someone who also knew his friend. JJ speaks about lost friends, memory loss, and working at the VFW.
17:10
JJ remembers a typhoon off the coast of Guam. JA remembers humorous stories of fixing equipment with stolen parts.
21:30
JA and JJ remember the Tet Offensive.
26:45
JA and JJ speak about military experience, friendship, and veteran organizations such as the VFW and American Legion. They talk about welcoming other veterans, benefits, and transitioning from military life.
30:15
JA speaks about refusing medical benefits because he felt others needed the resource more. They discuss health issues from Agent Orange and putting in requests for Purple Hearts.
34:00
JA and JJ speak about their respect for the those who volunteer for military service today. JJ remembers being discharged and becoming a teacher; JA remembers becoming a mechanic and starting a BBQ business. They speak about JA's cooking and share closing thoughts.