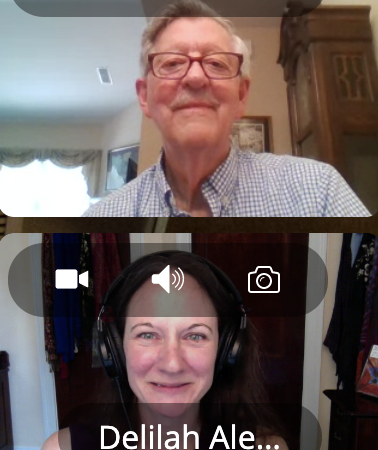 One Small Step partners, Joseph "Joe" Longacher (82) and Delilah Alexander (46), share about their upbringings, Joseph in Virginia and Delilah in West Virginia. Joseph shares about his path becoming a general practitioner and how his liberal views have been shaped and influenced by his faith, and Delilah talks about putting herself through college, studying philosophy, and her belief that all humans have a responsibility to care for each other.

0:50
TRACK 1 DA and JL on their interests in One Small Step.
2:18
DA on her upbringing in Nicolas County, WV. JG traces his his family’s roots in a mennonite community in Virginia and determining his career path as a general practitioner.
8:00
DA shares her liberal views and how she pursued her education despite encouragement not to go to school from her father. She talks about her career now as an adjunct professor and the death of her husband.
14:30
DA on choosing to study philosophy. JL talks about his choice to become a doctor and shares about his wife’s career as a teacher.
17:15
JL wonders about if his wife were still alive how she would feel about the political climate of today. He talks about losing his son-in-law in an auto accident.
19:00
DA talks about her son and his career goals for himself.
22:00
DA talks about her Christian upbringing, deciding to be an atheist as an adult, and how she centers her beliefs on human rights.
24:00
JL talks about what he’s heard about Facebook and the arguments that take place there. He talks about those who choose not to get the COVID-19 vaccine.
28:00
JL talks about his desires to interact with people who are different from him. He shares a story about learning to pay attention to minority viewpoints.
1:30
TRACK 2 DA talks about her beliefs about peoples’ responsibility to care for others, including animals. She talks about where she derives her morality.
4:00
JL on deriving his morality from his religion. He discusses his current beliefs about how religion has informed today’s racism.