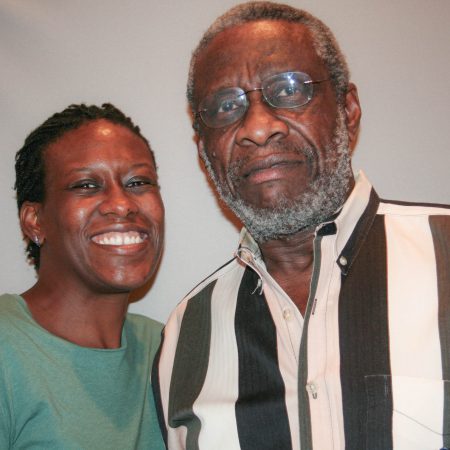 Judge Olly Neal grew up in Arkansas during the ’50s and didn’t care much for high school. One day he cut class and wandered into the library. It’s there he came across a book by African-American author Frank Yerby. The provocative cover piqued his interest, but Olly had a rough-and-tumble reputation to uphold. So rather than check out the book and have his classmates see he was voluntarily reading, he stole it.

He came to StoryCorps to tell his daughter Karama Neal about what happened next.

00:00 I was rather troubled High School, senior to town about 16 years old. Then I spotted this book. That looked rather risk are all the Treasure of Pleasant Valley on the cover of a drawing of a woman who appeared to be wearing something that was basically safe to put. The symbolism was really great for me at that age is 16 and then I realize if I read the book, two of my classmates, the girls were volunteered at the library and they saw me taking out a book. They tell the boys, then my reputation would be down cuz I was reading books. And I wanted to know what, all I can do is fight and cuss. And so finally, come steal a book. And so, when I finish the book about the for a week or two, I brought it back night, and when I put it back, that was another book by Frankie rivers that too. So I took it under my jacket and later brought it back. And I was a

00:59 Celery is 13 to be exactly at a gathering at my high school of my class reunions. Then the teacher, who have been the librarian Mrs. Mildred Grady was there. She told me that she saw me take that book when I first took it. She's a first thought was to go and tell him. Boy. You don't have to steal a book. You can check them out there free. Then she realized what my situation that I could not, let anybody know. I was reading though. She said that, she decided that if a old boy, we read a book she and mrs. Saunders. Would lie to Memphis and find another one for me to read and it would put it in the exact same place where the one I taken walls. And every time I took one out, they headed to Memphis to find another one that you got to understand that. This was not an easy matter then because this is 1957-58 and black, authors were not special available. The number one and number two, Franck. Ribery was not such a widely known author and number three, they had to drive all the way to Memphis to find it and I couldn't news is great.

01:59 If we're getting me in the habit of enjoying reading so that the I was able to put Law School in Savannah.