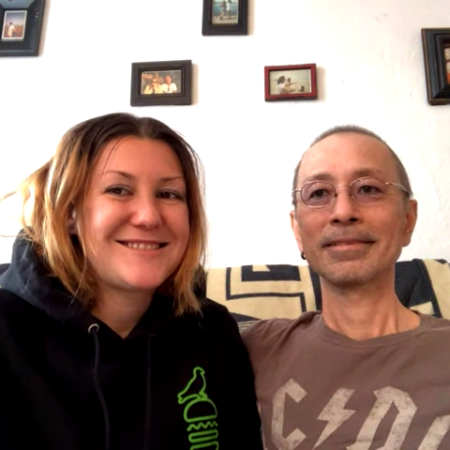 Kenji Kawasaki (55) and his wife Kristen Kawasaki (36) reflect on Kenji's diagnosis with cancer in early 2020, his treatment at both The Floating Hospital and at a hospital in Japan, and his journey towards recovery. Kristen and Kenji also talk about their work to design a custom bandana to support The Floating Hospital.

1:00
Kristen Kawasaki (36) and Kenji Kawasaki (55) talk about first meeting while working in the fashion industry and falling in love.
2:00
Kenji recalls being shocked when he found out about his cancer diagnosis. He'd had terrible symptoms and had met with a doctor at The Floating Hospital.
4:00
Kristen remembers how she wasn't able to go to Japan with Kenji when he left to get care there earlier this year, due to COVID and financial issues. Kenji tried to stay positive.
5:30
Kristen talks about how she first heard of The Floating Hospital, after having a dental issue and seeking care since she had no insurance. Later recommended Kenji go there.
7:00
This was Kenji's first experience with American healthcare system. He found everyone at The Floating Hospital to be welcoming and helpful.
9:00
Kristen and Kenji talk about coming up with the idea to create a bandana with The Floating Hospital's logo.
12:15
Kristen shares that her family has three generations of tugboat operators in NYC. She found out that her dad's company hauled the ship run by The Floating Hospital when it shut down.
14:00
Kenji talks about why they chose to make a bandana, what the design is and how he wanted it to benefit The Floating Hospital since he felt very grateful for their help in navigating his cancer diagnosis and transfer to Japan.
19:00
Kenji talks more about his experience in hospital in Japan and how he stayed in touch with Kristen and continued working, coming up with the design for the bandana.
27:00
Kristen says she learned this year how much we are responsible to others and how she wanted to help. This is why they started the bandana project.
30:00
Kristen and Kenji talk about first meeting and falling in love.
35:00
Kenji talks about his dreams for the future -- beating cancer and using art and design to connect with other patients and bring joy to people who are sick.