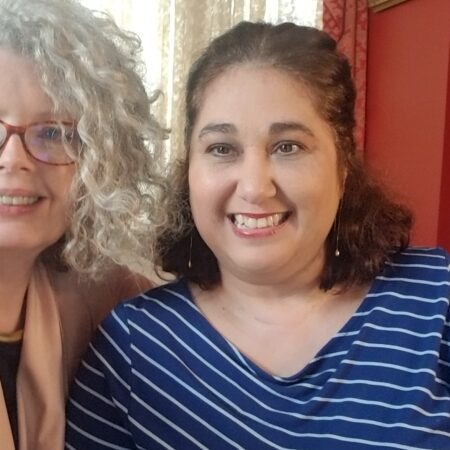 Dr. Laurie Rogers (55) interviews her friend Dr. Maria De Leon (52) about her experience as a neurologist specializing in Parkinson's Disease and later being diagnosed with the disease herself.

0:53
Maria (M) and Laurie (L) talk about the first day they met.
2:05
M shares one of the happiest moments of her life: spending time with her grandfather. M says the one of the saddest moments was losing him.
3:45
M says both her grandparents had a great influence on her life. M would like to dedicate the interview to her grandmother who dealt with Parkinson’s Disease.
4:28
M says her grandmother taught her how to gracefully deal with a disease. M also recalls how her grandmother loved to cook.
8:08
M shares how her life has been different than she expected. She said the Parkinson's has been a blessing in disguise because it has allowed her to do the things she wants to do in her life that she didn’t have time for as a doctor.
9:44
M shares how she would like to be remembered: she has always been a little rebel and a little unique. M says she hopes her friends remember her as someone who is fun to be around. She says she would like to be remembered as a Parkinson’s Diva. M explains that she owes some of her personality to her grandfather because he spoiled her a bit. Laurie (L) says it sounds like M’s grandfather was preparing her for this phase of her life. L says that M’s way of life is encouraging and beautiful to witness. M says she likes to encourage people to be genuine to themselves and that in order to be happy you have to know yourself and love yourself. M says as a doctor she has found that a lot of times when patients came into her office, it is not always health problems but personal problems that can lead to the root of the problem.
16:41
M talks about of the day she learned of her diagnosis: she had been practicing neurology for fifteen years, she had just lost her grandparents, and she noticed that she was having problems with her vision and going to the bathroom constantly. M explains that she was using the bars that she had installed in her office for her patients and she could not do the things she was asking her patients to do so she knew she had Parkinson’s. M adds that those around her assumed she was grieving or that she was sympathizing too much with her patients. She says it took two years of seeing specialists to get the diagnosis. M says she was initially relieved when she got the diagnosis because knew she wasn’t crazy and that she knew her neurology. She adds she then felt sad for a bit because she had seen all the stages of Parkinson’s with her patients.
24:39
M describes the experience of telling her family of her diagnosis. She says it took several years for it to sink in to her family that she had Parkinson’s.
27:10
M says that as a neurologist she always felt the Parkinson’s community was the best community and now she gets to be a part of that community even more personally. M says it’s difficult when people look at her and comment that she looks fine or question why she’s stopped working or how sick she is. M says Parkinson’s presents differently in everybody. M laughs and says we all do stupid things, sometimes with Parkinson’s, we do more stupid things, it’s just a part of being human.
31:30
M shares advice she would give to someone newly diagnosed with Parkinson’s: the disease is there but you still have a whole life.
34:55
M says people are learning that Parkinson’s can affect young people, that it can look different in both men and women, and that there is more to the disease than the eye can see.
36:45
M shares that due to her illness she has lost several friends because they didn’t understand how her illness affected her life.
39:52
M says God had a sense of humor. M says being a neurologist and working with Parkinson’s patients felt like a calling, and later her grandmother developed the disease and then she herself did.
44:12
M shares about her work with women with Parkinson’s. M says she has always been interested in working with the hispanic population and learning how Parkinson’s affects young women.
46:48
M shares some final kind works to her friend L. L does the same. M says Parkinson’s has in some way given her confidence and allowed her to really enjoy being a mom.
52:40
M explains that the tulip is the flower of the Parkinson’s community. She shares a piece of an essay she wrote for the Parkinson's community in both English and Spanish.