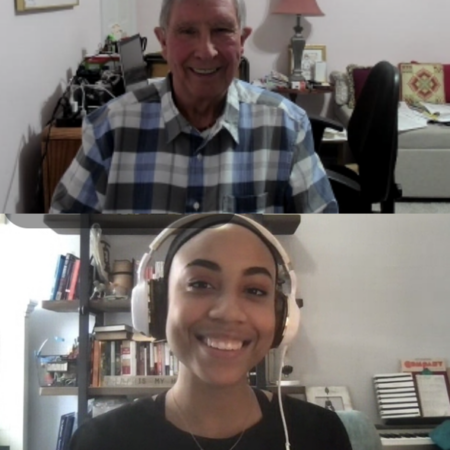 Summer Cody (22) talks to new friend Ray Stephens (76) about a person who Ray met during a 2012 blizzard and how that person changed Ray's life.

1:05
RS talks about the snowstorm during Christmas of 2012. He also talks about taking pictures from his porch during the blizzard.
6:50
RS talks about standing on his porch and seeing a person walking through the blizzard, who said that he wanted RS to make a phone call for him.
8:50
RS says that he knew the man was in trouble and needed help, and he couldn’t let him keep walking alone in the snow. RS shares that he told the man he would take him wherever he needed to go.
11:40
RS describes driving the man, named Walter, through the snowstorm to the halfway house where Walter was living. RS also talks about what Walter told him during that drive.
20:00
RS says that a week later, Walter showed up on his door, and, while talking to RS’s wife, said, “I wanted to say thank you to your husband for saving my life the other night.”
21:55
RS shares that two years later, Walter came to the door once again and told RS that he had become a minister in a church. RS says that he hasn’t seen Walter since then.
27:00
RS talks about the role that meeting Walter played in RS’s own spiritual journey.
32:40
RS shares a message he would like to give to Walter, saying that he hopes their paths will cross again.

00:30 Hello. My name is Summer Cody. I am 22 years old. Today's date is Thursday, April 8th 2021. I'm calling in from Brooklyn New York. The name of a conversation partner is right and we are new friends and I'm very excited to speak with him today. All right, so I'm just going to go ahead and if you hear a cat my apologies it is my cat is very noisy. But I'm just going to jump in really quickly for first question, which is could you just tell me a little bit about the Christmas of 2012 and why that stands out in your memory and it's so important to you. It was it stands out in my memory from the standpoint that

01:18 One of the big things about it was, Arkansas weather.

01:22 And very seldom do we ever get big snow storms in Arkansas? We had won this past February in which we got 13 inches of snow. Actually. It was 15, I guess.

01:38 But this particular Christmas it was it was really an exception. It wasn't snowing when my wife and I were driving over to my daughters and son-in-law's house have Christmas dinner and watch bring kids open their Christmas gifts from us.

02:16 Interest note so much that driving home. What normally was there 10 minute drive took us 45 minutes to get home.

02:28 I'm very fortunate because I grew up in Colorado and learned how to drive in in the winter time and so consequently navigate it and we made it home safely.

02:47 Awesome, but was there something else that was very special about that night for you?

02:56 It was very special for me snow is very magical.

03:08 There's something about snow at night for me. And I guess it was growing up in Colorado that did this for me because I used to love to watch snow especially big snow when it was falling in the way that the light plays on it at night and Shadows on it.

03:32 Unworldly things to it. It it it isn't such different shapes and shadows and you know, it reflects the light reflects off of everything and it's so still and quiet in the specially because of this particular night, and there wasn't any traffic Gallup.

04:08 That night wasn't any particularly different.

04:15 And I looked at it and I was amazed by it. You know, I went back into the house when I got my camera and I guess

04:27 I'm not a very I'm not a professional photographer. I will own up to that. I've read a lot about about photography and digital photography. Does this for you now, you can take a gazillion pictures.

05:05 With the light in in towards the light and across select, you know, hoping that that I would come up with just that that perfect picture.

05:18 Back porch and I turn the flood lights on back during this totally different because my front yard is not well lid that has has straight pipes and such will the backyard has flood lights back there. And so everything is bright and snow drifts and

05:41 I sat there and I took pictures and Marvel that.

05:54 I felt compelled to go back out on the front porch.

06:17 And what what happens after that when you went back out?

06:30 I stood there and I was just soaking in the Stillness of everything and

06:37 So I started taking more pictures and and that's always doing it.

07:41 When you wanted me to call this girlfriend.

07:44 Well, I'm hearing impaired. So I asked him I said come up closer to me so I can I can hear what you want me to do.

07:54 So I gave him the information. He told me that he wanted me to call his girlfriend and to

08:15 When I got my cell phone out and that's why I turned around. I saw him turn around and start walking back down the driveway and feel down with me.

09:05 To take them wherever you need it until

09:22 Did you know anything about this person but she had just met and we're going to take somewhere where he had to go.

09:40 He was in trouble who he needed help. I mean from the looks of him because he'd been walking through deep snow.

10:12 And how do you what have you learned about him since then? What what do you know about him now. Who he is?

10:47 I've worked with alcoholics that work with addicts networked with.

10:52 Incarcerated individuals in and most of them are ordinary people that are just made.

11:05 Thinking back on this other probably done it.

12:12 What is card gotten stuck in this girlfriends parking lot?

12:25 And Walter has been walking for the past nearly three hours to get to where he was and the two miles north up and down some really really big hills and

13:19 Davis can you get sent back to the penitentiary?

13:58 Told me that he had lived a very good life and he made some really bad choices.

14:04 Let it costing time in the penitentiary but that he had a good job now a bridge painter on on the interstate.

14:16 Highway project and that he was really trying hard to to turn his life around.

14:41 He had a pause in his in his conversation that was few seconds of Silence.

15:20 And I don't know summer if you favor if you've ever looked at pictures of snow falling falling snow, especially.

15:40 There's there's not a whole lot of difference in one picture to another to differentiate.

15:48 You know those pictures you just don't see that much difference between and and I told Walter. I don't know why I went back up there. I mean

16:47 He said wait a minute. Here's to you. Here's where you turn. He said no, he said stop. I don't want you. I don't go any further I said because this is this is an area that has been driven into me, so I don't want you to get stuck.

17:04 Well, I've got a little four-wheel drive vehicle and it had already proven itself. It was it was fully capable not told him I said

17:16 You've already been through enough.

17:20 You're not you're not going to I'm not going to watch you get out struggle to get through more snow. I said, I'm I'm taking you to the door.

17:43 Slither but we got up the hills and we made it up to the halfway house.

17:54 We said our goodbyes and you think me over and over.

18:21 His final words to me were Merry Christmas. God bless you.

18:44 Ultra being sent back injury

18:52 Have you went and Walter kept in touch over the years?

19:39 2012 was much different. We had bright sunshine and fairly moderate temperatures in the snow was gone.

20:09 I would caution will go in and follow my wife to the door just for sake.

20:33 I just want to stop by and say thank you for your husband saving my life tonight.

21:15 He didn't stay too long because he had to get back to the halfway house, but

21:40 Civil proceedings thoughts about Walter off and on what happened to me.

22:06 There was a totally different Walter standings.

22:24 They invited me on this at their living room. We talk to each other.

22:36 Talking with each other just just catching up on each other's Journeys and

22:45 His job and finished with a interstate construction project being completed.

22:53 Dominican big smile on his face

22:58 We sent the founder of our faith community.

23:09 For who he was rather than what they expected him to be.

23:18 Mutant made such a difference in him that

23:25 They become a minister in that church.

24:16 You're finally said, you know that he needed to leave but then he probably gave me this.

24:49 What you did for a stranger that Christmas?

25:09 And have you seen Walter since then have you kept in touch since then?

25:55 Cuz I'm a ponerte about that for a long time and I've been on a spiritual journey.

26:19 Probably done more Ministry in my life not being a professional Minister within I would have this if I had actually gone and completed my mind.

26:38 You know, there's been times that I've been more aware of my spiritual journey.

26:44 Another person's probably that time when I'm at Walter was one of the other times.

27:07 If there are many coincidences in my life.

28:33 And I can't say that I always make the right decision. I'd like to leave that I do but I don't like keep trying and this is hit every day you're presented with choices.

28:55 And one more presented when these with these choices.

29:40 They let me into a deeper spiritual journey that I continue to walk.

29:50 And it has been such a fulfilling hard my life and I'm happy for that.

30:12 Would you describe yourself as more tuned in?

30:23 I think I'm probably more aware of the messages send impulses that now.

31:25 And seeing the needs of others and

32:20 Is there a anything else that you would like to say about Walter?

32:54 When you catch up with each other's space Journeys.