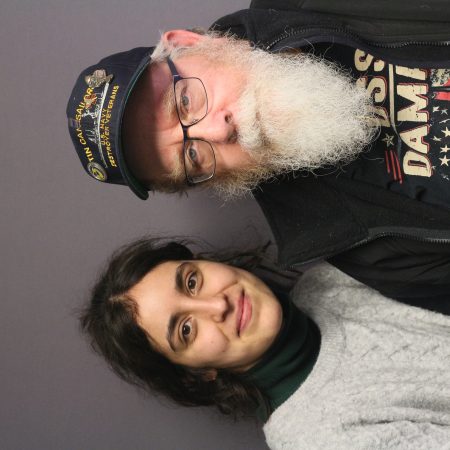 Robert Kell and Zazil-xa [no name given]

Robert "Bob" Kell (64) speaks with his conversation partner Zazil-xa [no name given] (25) about his childhood, joining the Navy at his father's behest, his Navy career and life afterwards, and counseling for military veteran burnout.

0:50
RK recalls moving to Las Cruces at age 5, his parents' work in the Nasa Lunar program, being bullied, and joining the Navy at his father's behest. RK remembers the early days in the Navy, with a cruel commander.
4:00
RK speaks about butting heads with his father and his first tour of duty aboard a ship. RK speaks about his role as a Boiler Technician, going ashore on Liberty, and his second and third tours of duty on ship.
10:30
RK speaks about adapting to military life, having to adapt back to civilian life, struggling with substance abuse, and leaving the Navy burnt out. RK shares memories of moving to New Mexico in a VW bus with his parents.
13:20
RK speaks about his counselor encouraging him to record the interview, and remembers a story in which he was lied to and brought on ship to Newfoundland instead of Puerto Rico, totally unprepared. RK shares other memories of danger and close calls aboard ship.
21:35
RK speaks about learning about his alcoholism, high stress tolerance, and strong morals in the Navy. RK speaks about vacationing at religious sites, and talks about civilians misunderstanding veterans.
27:45
RK talks about going to firefighting school in Virginia after the Navy, and his last tour in Pearl Harbor. RK describes the meaning of his knuckle tattoos, which read, "Hold Fast."