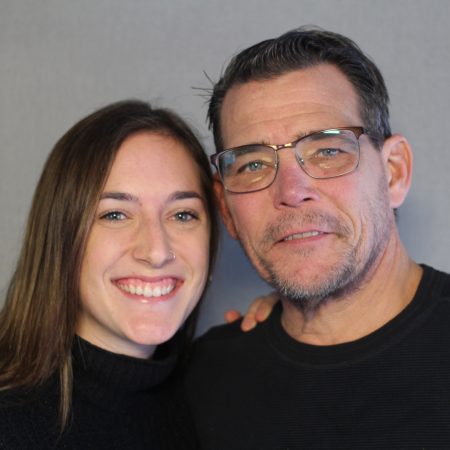 Ronald "Ron" G. Zikmund (56) and his daughter Lea Zikmund (23) talk about Ron's memories of growing up as the youngest sibling and the relationship he had with his dad later in life. They recall some of the times they spent together during Lea's upbringing and express their pride and gratitude for each other.

00:45
RZ recalls the imaginary friends he had during childhood and the houses his family lived in.
05:00
RZ reflects on what his relationship with his siblings was like growing up and how he earned his "cool" factor. He tells the story of racing his older sister to prove he could win.
11:30
RZ describes what an ideal day with his family would be as a kid. LZ recalls what she and her paternal cousins used to do together at family get-togethers.
16:10
RZ talks about his father's life and the ways that he and his values impacted him.
21:10
RZ recalls what he and his dad used to do together. LZ recalls some of what she and RZ did together when she was growing up, cooking egg rolls and Thanksgiving dinner.
25:30
RZ tells the story of how their family first met the neighbors that ended up becoming some their closest friends.
31:30
LZ recalls how one of the friends, Kevin, helped her paint a mural in her room.
33:30
LZ reflects on how she has never had to doubt RZ's pride in her. RZ shares some of the many things he's proud of when it comes to LZ.
36:30
RZ reflects on how much it meant to him that LZ and her sister appreciated his work to put them through school. LZ expresses her gratitude for RZ.