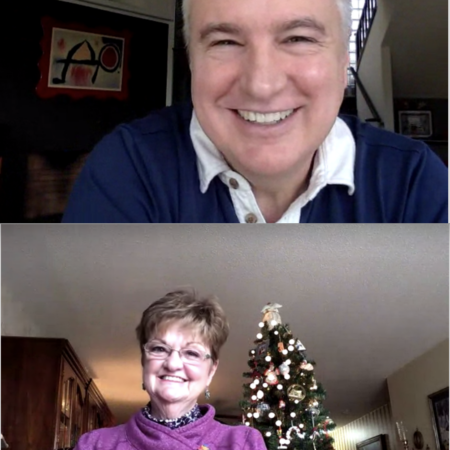 Stan Scoggins (55) talks with his mother Jan Scoggins [no age given] about her experience being a "military wife," traveling around with her family during her husbands military career, and Jan shares the story of her travels to Thailand, involving the CIA and other adventures.

01:20
SS recounts some of the places that JS lived in Kansas, and then asks JS what happened when her husband Frank enlisted in the air force.
04:18
JS talks about knowing she would be a military wife early on, and SS talks about some of the moves his family made early on in his life.
05:50
JS talks about the move to Okinawa, Japan.
07:50
JS talks about during the Vietnam War when her husband was stationed in Thailand, her first experience getting on a really big plane while her husband had an R&R break in the air force, because it was really important for her to see him in his environment in Thailand.
13:20
JS talks about landing in Hawaii on her connecting flight to Thailand, but there was a Typhoon and she ended up in Hong Kong on a plane with an ambassador and describes all the events that transpired over the many long hours it took finally getting to Thailand.
18:45
JS talks about the moment she realized she had been flown to Thailand by the CIA, when she shared with her husband that the airline had been “Air America” and he exclaimed “that's the CIA!” and JS shares some of her experiences while she was visiting her husband in Thailand.
24:00
JS talks about the “off-base” house they lived in in Okinawa Japan and her husbands schedule with the military during this time, SS shares some of his memories from this time.
29:30
JS recalls receiving a letter in Japanese that she could not read and asked her housekeeper to translate it, and apparently she owed hundreds of dollars in phone bills which was actually due to her landlord and had to appear in court.
33:50
JS recalls her trip to Ie Shima Airfield, to the gunnery range.
37:30
JS talks about coming back to Las Vegas, she was pregnant and SS’s brother was born.