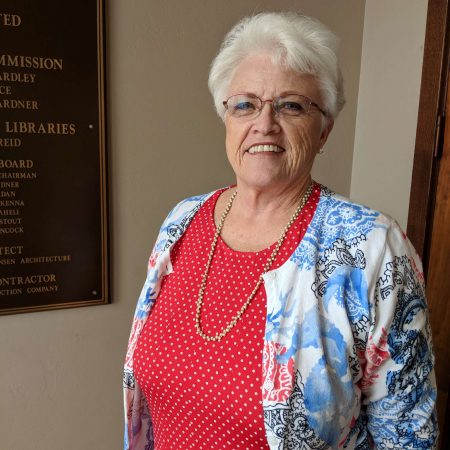 The library provided a comforting place to Maureen Booth when her family relocated to St. George, Utah

Recording February 27, 2018 – When the Haslam Family moved to St. George, Utah in the summer for her father’s work, Maureen Haslam Booth was homesick for her friends and grandparents. St. George didn’t even have television, she said. It was 1954.

It was so hot compared to what she was used to in Salt Lake City, and she sought refuge in the books from the St. George Library. She described sitting on cement slabs to the side of the steps at the north entrance where it was shady and cool. Maureen sat and read her books. “That was of the only place I felt at home when I first came to St. George,” she said.

When school began, she was assigned to a small classroom held inside the children’s section in the basement of the library. Maureen attended second grade in that setting with Mrs. Fae Picklesimer as her teacher while a new school was being built. It had tables for six to eight students, no desks. She was surrounded by books and said she read every book in that section. Maureen later attended 3rd grade at the brand new West Elementary School located on West Tabernacle.

Maureen spent many hours at the library and graduated to the “upstairs” for the teens and adults. The library was a very important place to her. And is today. She stills reads and has been in a book club for 40 years. She laughed as she explained that she is the only one out of her family of six siblings to still live here, when she hated St. George so much at first!