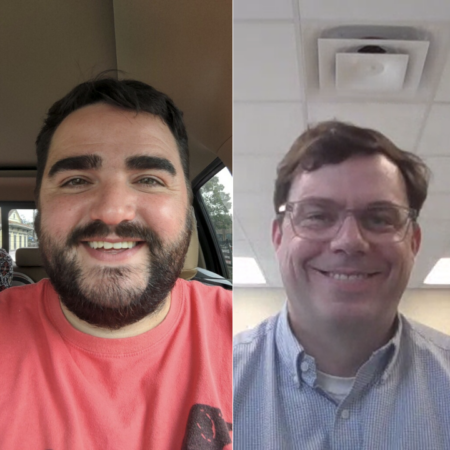 One Small Step partners Thomas "Chris" Currie (46) and Thomas "Montgomery" Cole (33) talk about the intersection between faith and politics.

1:22
TRACK 1 TCC and TMC ask each other questions about their One Small Step biographies.
4:00
TCC talks about his decision to participate in a One Small Step conversation. TMC and TCC discuss how their faith connects to their political beliefs.
8:30
TCC and TMC talk about how much weight religion carries when it comes to choosing a political party.
15:30
TCC talks about his role serving a church that is home to people of varying political beliefs.
17:30
TMC talks about a book, Jesus and John Wayne: How White Evangelicals Corrupted a Faith and Fractured a Nation.
19:20
TCC reflects on the Trump presidency. TMC reflects on the January 6th Insurrection.
27:40
TMC talks about disagreements with people who hold different beliefs from him and talks about how he determines his motive in those situations.
32:30
TCC talks about how people often connect “God” and “country” as concepts. He suggests that God is larger than America and other Christians should consider that.
1:00
TRACK 2 TCC expands more on the people he works with in his congregation.
2:50
TMC shares some of his specific beliefs about health care, abortion and the death penalty as examples of beliefs he feels set him apart from others around him.
5:00
TCC talks about his beliefs about race.