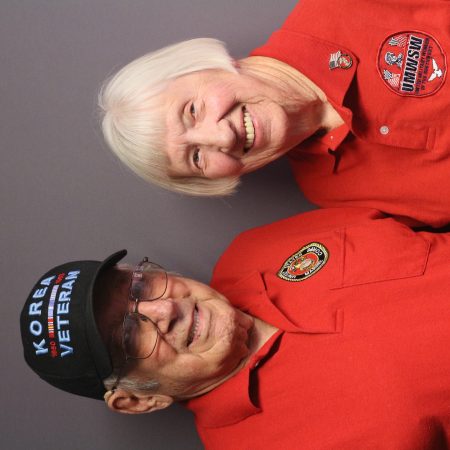 Carol Gaines [no age given] speaks with her Marine friend George A. George (90) about his career in the US Marine Corps, memories from bootcamp, serving in China, and an incident with an overturned tank in the Korean War.

1:40
GG speaks about his family’s Greek heritage, and initially wanting to join the Army or Navy before deciding on the US Marine Corps.
3:15
GG remembers his parents’ reluctance to sign his papers for him to enter the Marine Corps, and declining a job out of high school in order to join the service.
5:50
GG remembers arriving at Paris Island, South Carolina, for training. GG recalls smoking cigarettes and getting beat up by a sergeant for mouthing off while working in a mess hall.
7:30
GG speaks about being sent to China, witnessing poverty there while guarding cases of money for the United States, and running out of food after 7 days.
10:40
GG shares memories of returning to Treasure Island, San Francisco, before learning of the Korean War and having to re-enter the Marine Corps.
13:30
GG remembers being sent to Korea and having a position as a Jeep driver. GG shares the memory of seeing a tank that had fallen off of a bridge and overturned, and having to save the Army troops stuck inside. GG speaks about earning Medals of Honor and throwing them away.
19:40
GG reflects on his career as a Marine, the slowing of time in aging, and meeting other Marines after coming to New Mexico.