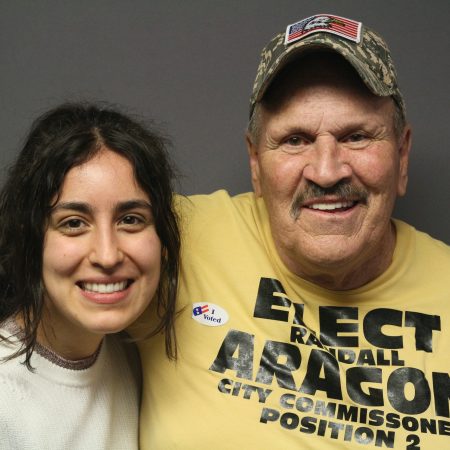 Mark Bartoloni (71) is interviewed by new friend and StoryCorps facilitator Zazil-xa Davis-Vazquez (25) about enlisting in the United States Military, fighting in the Vietnam War, the struggles he faced returning home as a combat veteran, and his life at the New Mexico State Veterans Home.

0:45
MB speaks about his childhood in Boston, MA and his family, including his father who was a veteran. MB shares memories of playing football in high school before breaking his leg and joining the military.
4:10
MB recalls enlisting with his friends and brother. After being arrested as teenagers, a judge offered a sentence or the choice to enlist in the military. MB speaks about the way poor people were targeted for the military draft.
6:50
MB describes basic training and speaks about enjoying the physical activity. MB remembers later arriving at Fort Belvoir, struggling with alcohol and going to Heidelberg, Germany, before receiving an order to report to Vietnam.
10:10
MB talks about his experiences at Travis Air Force Base before going to Vietnam. MB recalls the attitudes of soldiers flying to Vietnam for the first time, and shares his first experiences with the immense heat, mortar attacks, and seeing a truck explode.
13:30
MB speaks about losing his Catholic faith in Vietnam, and shares his worst memory of battle which changed his life.
17:00
MB recalls retuning from Vietnam, being in a psychiatric ward for 3 years, and struggling with alcohol.
19:30
MB speaks about being sober for 32 years, and meeting his wife while recovering. MB shares the story of his proposal and getting married.
25:00
MB talks about his wife giving him the gift of insight and speaks about loving to spend time together. MB talks about the New Mexico State Veterans Home in Truth or Consequence, and how far it has improved over the past year with help from their local representative and a new director.
29:30
MB expresses gratitude to his creator and speaks about the journey “from head to heart,” realizing he has love to share with others.