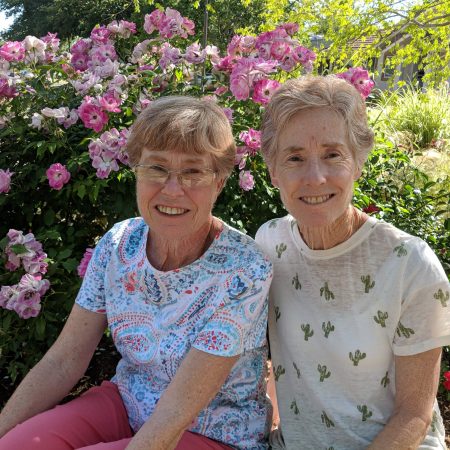 Recording May 8, 2018 – In the 1950s with both parents working, sisters Susan Ahrens and Mary Ashman rode the bus to the local Downey City Library in the summer to load up on books. This library was part of the Los Angeles County Library system. That was their vacation entertainment and Mary and Susan both became avid readers. Mary said a mutual 4th grade teacher Mr. Anderson exposed both girls to “The Hardy Boys” by Kevin Dixon and “Betsy-Tacy” by Maud Lovelace. Susan is three years younger than Mary and Susan said that reading got better when her skills improved and said her sister was a “good influence.”

Kent and Mary Ashman moved to the St. George, Utah area in 1975 from the Midvale, Utah area on the Wasatch Front. Mary had been used to a new library and found the St. George Library lacking in comparison. She knew it was a smaller tax base but complained to her father-in-law Harold Ashman who also belonged to the Rotary Club. The Rotary Club members thought getting a modern, updated library would be a worthy project. A new library opened in 1981 to replace the original Carnegie Library completed in 1916.